Genealogy of the Wiarda family

The origin of the Sources

The very first Wiarda found in written sources is Feddeko Wiarda; this is evident in a charter (see text Sententia Grietmannorum districtus winninge Anno 1369) in which the so-called Wiarda-viri (the Wiarda men) capture the chief Ludolf Jarigsma in 1369. In the same year Jarigsma was acquitted by a sentence pronounced by the Grietmen of Winninghen (A grietman -literally: he who greets-is partly a forerunner of the current rural mayor, and partly the forerunner of a judge in Friesland ; later Taco van Campen was also released, who had also been captured by the Wiarda viri. This Feddeko may have been the great grandfather of Sjoerd Wiarda, the potestaat (elected governor) of Oostergo. In the Wiarda Book it is described as follows: April 30, 1369 Grietmen of the district of Winninge pronounce a sentence releasing Luidolf Jargisma and others, captured by Wiarda's group and their party members. That in Domini MCCCLXIX. in vigilia apostolorum Philippi et Jacobi. (See Register of Charter).

On the internet, the origin goes back to Pybe Wyarda from 1245, but there are no written sources for this. The family holds the year 1369 as the origin because of the evidence of the above (court) certificate.

THE ORIGIN OF THE DIFFERENT BRANCHES OF THE WIARDAS

The family tree branches through Dothias Wiarda in the 16th century into 4 branches, including the first branch to Germany with Bucho Wiarda as ancestor. The cohesion

From Bucho Wiarda (1532 - 1595), the first East Frisian (German) Wiarda to the progenitors of the 3 German branches I II and III

(Previous 5 generations according to “The Studbook of the Frisian early and late Nobility” by Jr. Mr. M. de Haan Hettema and Mr. A. van Halmael, Jr.)

ORIGIN OF THE AMERICAN & CANADIAN WIARDAS

ORIGIN OF THE AUSTRALIAN WIARDAS 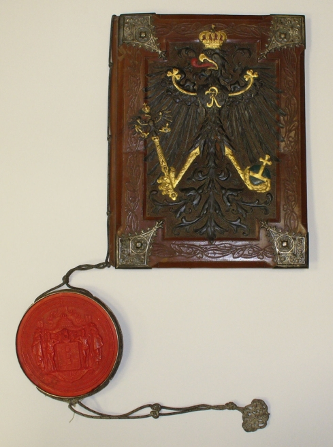 Conrad-Hermann Wiarda (born Emden, March 18, 1841, died December 25, 1915), was a major in the Prussian army. Because the nobility was strongly represented in the higher officer’ ranks (and important to advance to those highest ranks), Conrad-Hermann asked Emperor Wilhelm II to be included in the nobility to be put on an equal footing with the other noble officers. He based his application on the history of the Frisian Wiarda family researched and described in 1872 by his father Christian Heinrich Wiarda from Aurich, in which the great importance of the East Frisian Wiarda family was described.

With a cabinet decision of April 17 and a diploma dated July 31, 1895, Conrad-Hermann was raised to the peerage at the new palace in Potsdam. Unfortunately, the heraldry executive nobility agency claimed that the pointed ring around the swan's neck was not heraldically possible. Then, in the two top corners of the shield, 2 stud rings were placed instead of around the Swan’s neck. The leather-bound nobility letter was written on parchment, with a large seal and contained in a wooden box covered with leather. This wooden box was located in the study of his son Hans von Wiarda in Hanover in WWII and was unfortunately destroyed by a bomb. 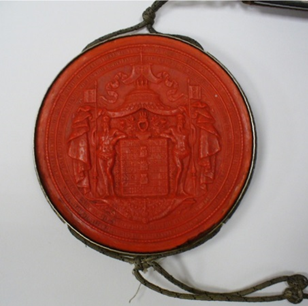 The embossed pavilion seal (wax) with the great royal coat of arms of Wilhelm II.

On the front of the cover is an embossed and colored eagle with the bound initials "FR" (Fridericus Rex = King Friedrich) from the Prussian coat of arms. A copper pattern is attached to the silver knitted sealing cords that hold the dragonfly together, which contains the embossed pavilion seal (wax) with the great royal coat of arms of Wilhelm II.

The first two parchment pages are empty. After a handwritten list of Wilhelm's various aristocratic titles starting on page 3, pages 4 and 6 - interrupted by the depiction of the weapon that Wiarda was allowed to use from now on - are followed by the most important passage for the recipient: this document, District Court Director Florens Hieronymus Eduard Wiarda, Lieutenant of the Territorial Army out of service, in Hanover, along with his existing and future lawful legitimate heirs and descendants of the male tribe, of both sexes, to give him a permanent memorial to our special royal [...] grace and to give mercy to the hereditary nobility of our monarchy and our country and to give him and all his intended descendants all the righteous people, honor and privileges of this class, in particular the right to "von Wiarda" and to wear the weapon and jewel described below."

The Coat of Arms of von Wiarda

The coat of arms was designed by Hans von Borwitz and Harttenstein, the Prussian herald master, drawn by the royal coat of arms painter Heinrich Nahde. It consists of a three-piece shield. In the silver fields to the left and right is a black pointed collar, in the blue field in the middle a flight-ready silver swan. A tournament helmet surrounded by black-silver or blue-silver tendrils floats above the shield, which in turn has a crown from which a swan rises with spread wings.

Florens von Wiarda was the son of the city judge Christian Heinrich Wiarda (born August 22, 1809 in Emden, died April 1, 1879 in Aurich) and his wife Dorothee Caroline Metger (born December 23, 1818 in Emden, died September 15, 1904 in Hildesheim) and grandson of Georg Ludwig Wiarda (born January 31, 1781 in Emden, died January 26, 1832 in Emden), one of the founders of the Association of Fine Arts and Patriotic Antiquities in Emden. The father of the exalted - a grandnephew of the country syndicate and historian Tileman Dothias Wiarda (born October 18, 1746 in Emden, died March 7, 1826 in Aurich) - was a local member from 1835 to 1848 and later became secretary -and after moving to Aurich - and honorary member of "art".

This may be the reason why the nobility letter is now in the possession of the East Frisian State museum in Emden.

After the German Revolution of 1918, titles of nobility became part of someone's name. Among the noble families, von is considered a predicate. This predicate has been awarded since 1630 when nobility was granted to distinguish themselves from the non-noble lineages .